Stallone is actually not 100% Italian as everyone thinks. His father immigrated from Italy, but his mother was half French and half Ukrainian. He did grow up in Hell's Kitchen, Nova Iorque, which has its fair share of Italians. Another thing people do not know about Stallone is that his slurred speech and facial appearance impairment were caused by a birth medical issue where the doctors mistakenly cut one of his nerves at birth.

He would star in many movies throughout the 80's and 90's. Além disso, his other popular movies were Copland, Over the Top, Demolition Man, and Cobra.

Maybe his biggest mistake of the 80's was turning down the role for Beverly Hills Cop, which was scooped up by Eddie Murphy and would go on to be one of the classic action/comedy movies of the 80's. Embora, it's doubtful Stallone could play a “funny” cop like Eddie Murphy did.

Many critics point to Stallone's movie sequels where his characters changed personalities and the cliched reasons for the sequels where he doesn't want to fight, or is downtrodden, but ends up doing it anyway and finishing on top. This type of story-line has been played out over and over with movies and are unoriginal. In the 90's, studios stopped bankrolling his movies with mega budgets. Ainda assim, he still had enough box office success and his movies, a maior parte, end up with a profit even though many of his fans admit they were disappointed in some of his movies.

Stallone actually did some of his stunts in his movies and did not like to use stunt doubles as much as other actors. Também porque ele tocou os maus nos filmes dele tinha que olhar uma determinada maneira e que exigiu muita dedicação com treinamento e dieta.

Stallone's style of cardio was fasted training 30 minutes per day, he stuck to lighter cardio bike, treadmill, or stairs.

Em 2007, while going through customs in Australia, Stallone was caught with 50 vials of growth hormone. So based on this, we know he absolutely LOVES growth hormone, and there is no doubt it has helped him stay lean and muscular. Também, he has said testosterone is extremely important for a man, so we can assume he is on TRT. We can speculate he stays in great shape in his 70's with a simple steroid cycle:

Want to discuss Sylvester Stallone on our fóruns? Leia sobre: 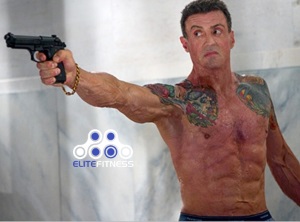