If there were a God of steroids, then trenbolone would be the one. Called in the bodybuilding community simply "Tren" or "Fina," it is easily the most powerful of the mainstream steroids, and once you use it, you will realize that nothing else out there can ever compare to this compound. However, trenbolone is not just powerful in terms of results it will give you, but also in regards to the side effects (specifically the androgenic side effects), which is why beginners should not use trenbolone until they become more experienced with anabolic steroids. 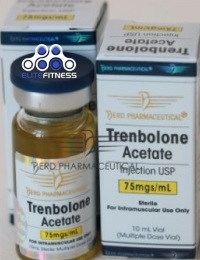 There is much confusion about the history of trenbolone because officially it ended up being a veterinary drug for cattle feed lots. As a result, many internet guru's will tell you that trenbolone is just a veterinary grade drug. In fact, I have had a guru lecture me on a forum saying he would never use trenbolone, since he doesn't touch vet drugs. Nonetheless, he would be wrong, as trenbolone was originally created in the 1960's for human use, specifically for treating malnutrition and osteoporosis, and it was sold under the trade name Parabolan by the pharmaceutical company Negma. Those who were lucky enough to use the original Parabolan before it was discontinued wish they could get back in time and stash away some vials.

In the modern era, trenbolone is produced by underground labs (UG labs), and it's used by many hardcore bodybuilders and gym rats to take their gains right to the stratosphere. Interestingly, it can still be found in the cattle industry as well, where it is used to 'beef up' cattle via ear implants. As a matter of fact, the Fina pellets are used by 'wannabe home chemists' to extract the active substance into an oil. This is why some refer to this steroid as finaplix or fina, instead of trenbolone. 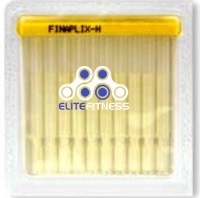 As it was mentioned above, it is not only very androgenic, but also anabolic, which gives trenbolone amazing versatility as a steroid to be used in any stack, or as a standalone compound.

Trenbolone is sold by underground labs with the acetate and enanthate esters. Additionally, it can also be made into Hex (hexahydrobenzylcarbonate) form, which is pricier, and hence less widespread. In my experience, I have not noticed enough difference between Hex and enanthate to justify paying more for it, but some bodybuilders maintain that for some inconceivable reason it is better and safer.

Furthermore, there is also trenbolone in oral form that is far less popular than the injectable versions, so you don't get to see it frequently.

Finally, there is also a no-ester trenbolone, which is very rarely used because of its very short half life and usually painful injections.

Trenbolone is a 19-nortestosterone, meaning it lacks a carbon atom at the 19th position, making it a modified version of the nandrolone hormone. However, the secret to why this compound is so androgenic is that it carries a double bond at the 9th and 11th carbons that allow it to bind more strongly to the androgen receptor. This prominent androgenic activity means aggressiveness, strength, mass, and feeling like superman while on. I've actually accidentally broken light bulbs and glasses with my hands on trenbolone, as it makes you that much stronger outside the gym without being aware of what you are doing.

Interestingly, trenbolone is so anabolic, that it will literally suck the nutrients out of your body into your cells, causing a drop in blood sugar, and making your body demand more food. Consequently, those who eat correctly on trenbolone will notice an incredible amount of mass and strength gains in a very short amount of time. In fact, trenbolone has the best feed efficiency of any steroid that I know of, which is why this steroid is used in the cattle industry.

As it has been mentioned earlier in the article, trenbolone is anabolic and androgenic on its own, so you can use it solo at very conservative dosages, and still have sensational results. However, many self proclaimed guru's will tell you that you have to stack testosterone with it, and this is flat out false because trenbolone is capable of doing all the work by itself. All in all, there is no need to stack testosterone or any other steroid with trenbolone. However, I do recommend you add some light testosterone to the stack like 200mgs of enanthate per week.

Even when used at such low dosages as 200 milligrams (mg) per week, trenbolone can still give very prominent results. Some users will run up to 600mg a week, but keep in mind that the more trenbolone you run, the more side effects will occur.

Trenbolone's half life will depend on the ester attached to it, and it goes as follows:

The detection times for all trenbolone esters are listed as 5 months. This makes them a poor choice for tested athletes, and those who want to avoid being caught doping, should go with the no-ester version. However, even with no esters the detection time can be up to 60 days or more.

If you have read this far, it probably sounds like trenbolone is too good to be true. However, now is the time for the bad news - trenbolone's side effects are as listed below.

Trenbolone is notorious because it can cause problems outside the gym due to the so called “tren rage,” which occurs because of 2 main reasons. First of all, it is so androgenic that you will get incredible aggressiveness on this compound. Therefore, it is important to workout and have sex frequently to get rid of this pent up aggression, or else you could end up ruining friendships and even relations with family. Furthermore, do not use trenbolone if you are new to steroid use because the androgens will be too hard to handle without the necessary experience. Besides, if you are not capable of controlling your anger, or do not have the maturity to deal with these types of androgens then pick something else to use.

The second cause of rage is low blood sugar, which can make even the most mild mannered persons cranky. Precisely for this reason it is important to spread out carbs while on tren. Hence, low carb diets do not work well with trenbolone if you want to avoid trenbolone rage. A good trick I have learned over the years is to never go to sleep hungry when using tren, or you will have trouble sleeping due to insomnia. Another thing you can do is carry around glycogen pills, which will help you maintain blood sugar levels. You should also stay hydrated on trenbolone by drinking plenty of water.

Many online guru's will tell you that tren dick is caused by a rise in estrogen, but trenbolone does not aromatize at all. Therefore, estrogen levels have nothing to do with libido issues when using trenbolone. Instead, prolactin levels tend to rise on trenbolone, which can lead to many side effects, including ED (erectile dysfunction) and low libido. Hence, using a prolactin inhibitor is essential to prevent prolactin related problems. Two of the most popular prolactin inhibitors are cabergoline (dostinex) and pramipexole (prami in bodybuilding circles). Cabergoline is a better choice due to milder side effects.

Trenbolone causes dopamine issues more than any other steroid, and this is a reason they call it the relationship killer. Dopamine makes us want to have sex with multiple partners, and it makes us do a lot of things to get rewarded. As a result, when you use trenbolone, it becomes more difficult to stick with one partner, which can be a problem for those who have issues with cheating.

Just like all anabolic steroids are, trenbolone is suppressive, so make sure to run a proper post cycle therapy (PCT) after using it.

Trenbolone can also cause such androgenic side effects as heart strain and lipid problems. No other steroid makes the cholesterol levels to become more out of whack than trenbolone. This is why it is important to run with it a good support supplement like N2Guard.

Moreover, trenbolone ruins cardiovascular performance due to its war on the heart, and its ability to drop blood sugar levels, causing the user lose energy fast. Luckily, you can use Cardarine (GW-501516) to help offset this issue.

It is standard to set all time performance records on trenbolone, especially when it comes to strength and mass. Additionally, those that are insulin sensitive, will notice they 'shred up' easily on trenbolone, even with a poor diet. On the other hand, those who are more insulin resistant will notice that they build mass very quickly, and the weight/strength gain is incredible.

All in all, trenbolone has the amazing ability to turn a person into an animal in the gym, as you will destroy your workouts, and the incredible pumps are a real icing on the cake.

As it has already been mentioned, trenbolone does not have to be necessarily stacked with other steroids, but it still stacks well with everything. Nevertheless, keep in mind that the more androgenic compounds you stack with trenbolone, the more side effects will be increased. Personally, when I stack something with trenbolone I want it to be anabolic like anavar, primobolan, or turinabol (tbol). This prevents me from feeling so worn down from too many androgen side effects. However, if you want all injectables, go with testosterone and trenbolone.

A typical trenbolone cycle is around 10-12 weeks. This is a cutting run that will also give you some mass.

Trenbolone is sold by all underground labs, and it is one of the most popular steroids today. Besides, it is not expensive - a 10ML vial will cost under $95 USD.

Due to prominent androgenic activity of trenbolone, females should never use this compound in order to avoid irreversible virilization symptoms. 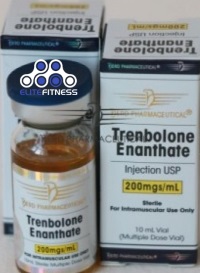 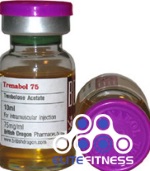 Read about Trenbolone of the EliteFitness.com Forums, over 10,000,000 posts and growing.