Anavar is the most popular trademarked name of the drug Oxandrolone, which is an oral anabolic steroid. In spite of being considered a weak steroid, many in the bodybuilding community have little understanding of how to properly use this compound, nor all of its powerful benefits.

Anavar was first introduced in the United States in the early 1960's, when it was synthesized by a big pharmaceutical company - Pfizer. In fact, as of this article, Pfizer had a market cap of almost $200 Billion, making it the largest publicly traded drug company in the world.

Regarding its use, oxandrolone was originally prescribed to promote muscle growth in those suffering from muscle wasting diseases, and today it is part of treatment for some HIV/AIDS patients.

Interestingly, in the late 80's athletes and bodybuilders began abusing it because they wanted to tap into anavar's ability to improve muscle growth. Unfortunately, this led to anavar being discontinued by Pfizer and picked up by Savient pharmaceuticals, who then used the trade name of oxandrin. As a result, the FDA later approved its use for more medical purposes; including hepatitis, HIV related weight loss, and Turner syndrome. Additionally, it is also considered beneficial for anemia, and it can offset protein catabolism from corticosteroid abuse.

Like all anabolic steroids, oxandrolone is currently a schedule III controlled substance in the United States, and it is only available via prescription or the black market.

Theoretically, anavar is very anabolic, and not very androgenic - the ratio is 450 anabolic to just 24 androgenic. Even though these ratio's on paper do not always translate to real life, in this case it is a pretty accurate description based on what we know about this steroid from practical use.

Anavar is an oral anabolic steroid, so it is taken by mouth and swallowed. As a matter of fact, there are some who have attempted to produce it as a liquid to be injected in a suspension form, but injectable forms of anavar are extremely rare.

Anavar is a DHT (dihydrotestosterone) derivative that has an added atom replacing the carbon 2 in the A-ring, which causes a rise in anabolic activity, and prevents any metabolic breakdown as well. This anabolic activity creates an environment for muscle wasting prevention, which not only has tremendous medical benefits, but also has the ability to be used by bodybuilders to get anabolic results of hard, vascular, and dry muscle mass.

It is also able to avoid being destroyed by the liver, since it has a methyl group addition, making it a 17alpha-alkylated (17aa) compound, and thus it is liver toxic. Although it has been shown in studies to be less hepatotoxic than other oral steroids, such as anadrol or halotestin, it is still recommended to use liver protecting support supplements like N2Guard.

Another benefit of anavar is its ability to decrease glucocorticoid hormones. This means that these nasty muscle wasting hormones like cortisol are kept at bay, which explains why anavar is so popular among those suffering from muscle wasting diseases.

Nitrogen retention in muscles is another trait anavar is known for. Obviously, this effect is common with anabolic steroids, but it is especially pronounced with anavar, and what this means is that we have a very anabolic effect in the body, making it easier to build muscle when you weight train.

Few people know this, but steroids do not actually burn fat. However, there are some studies that show anavar may be an exception to this rule. In studies, oxandrolone showed a direct lipolysis promotion. There are several explanations for this, simplest being that by reducing thyroid binding globulin anavar makes the thyroid perform better.

Of course, if you are carrying 20% body fat, just taking some anavar isn't going to magically drop you 4 pant sizes, so if that is your intention you will be disappointed. After all, it is best to use diet and exercise in order to lose body fat, and not depend on steroids for this purpose.

As a DHT derivative, anavar cannot aromatize into estrogen within the body like some other anabolic steroids do. Therefore, such estrogenic side effects as water retention, gynecomastia, or bloat will not occur. There is a downside to DHT though, since we know that a rise in DHT can cause head hair follicles to be fried, and anavar will do this if abused. Nonetheless, it mostly depends on the user, as some say it causes moderate hair loss, and others say they had little to no issues.

Sex hormone binding globulin (SHBG) is another thing that anavar binds well with, which is very good news for bodybuilders because it will make a steroid stack even better by increasing free testosterone ratio.

Since anavar is so mild, many bodybuilders and weight trainers do not understand that they aren't going to put on a ton of mass quickly, so they tend to unnecessarily overdose this compound. The proper dosage for men tends to be 40-60 milligrams (mg) per day, and some users will run up to 100 mgs per day. I have read of some bodybuilders using even more (up to 200mgs per day), which is abusive and completely unreasonable.

Besides, due to the fact that anavar is liver toxic, you shouldn't run it for long periods of time. However, it is less liver toxic then other oral anabolic steroids, which allows us to be more liberal with our cycle length. Hence, you can run anavar from 4 to 8 weeks with good results.

The half life for anavar is listed as 9 hours. It is important to remember that half life doesn't mean how long it is in your system, it rather means that after 9 hours half of the dosage is still left in your body. Consequently, anavar can be easily dosed twice a day.

The detection time for those who are tested for performance enhancing drugs is 3 weeks with anavar, which is pretty standard for other steroids in its class. However, there have been cases of athletes testing positive in the 4th week of anavar use. Consequently, it's best to put the detection time of oxandrolone at around 4 weeks (or 30 days).

Although oxandrolone is considered mild, it does not mean you should disrespect this compound, and think you can get away with abusing it. Just like all anabolic steroids, anavar is suppressive, so your pituitary glands will stop making hormones that stimulate the leydig cells into producing testosterone. Sadly, I have read some unverified 'forum guru's' claiming that anavar is not suppressive at low dosages, which is just not true, and ignoring its suppressive nature is a dangerous thing to do. Hence, you should always run a proper post cycle therapy (PCT) after using this steroid.

Another side effect is hepatotoxicity, which means you shouldn't drink alcohol or be on other drugs while using anavar. Obviously, stacking anavar with other toxic steroids is not a great idea for this reason.

Furthermore, anavar is well known for the wonderful muscle pumps that come with it. These pumps are felt when all the blood is being forced into the muscles causing them to swell and stretching out the layer of fascia tissue. Nevertheless, it can also be a bad thing when they get counter productive to your goals. In fact, high doses of anavar can cause crippling back pumps, and if you attempt to run on it, you will likely get lower leg pumps in your calves or shins. Taking taurine and potassium can help alleviate pumps, so it is recommended to do so while using anavar.

When used properly, anavar is a tremendous anabolic steroid, but it isn't for everyone. If you are looking to pack on 15 pounds of mass quickly then it isn't for you at all. It is more for those who want to add strength, and a couple pounds of pure muscle slowly. I have found that anavar is underrated when it comes to strength gains compared to the amount of mass you put on.

For those who are more 'physique' oriented, anavar can be utilized to harden up and become more vascular. Working out at the gym can be fun because of the rock hard pumps, and increased strength on anavar.

Anavar should be stacked to get the most out of it because it binds well to SHBG, making the other steroids in the stack work even better. Being so mild, it might be a good idea to stack it with something androgenic, such as trenbolone or testosterone.

Oral anavar stacking is usually done with winstrol or tbol. They stack well together, usually with 40mgs of anavar per day and 50mgs of winstrol per day.

Anavar is currently a schedule III controlled substance in the United States, and only available via prescription or the black market.

Unfortunately anavar is one of the most faked compounds, and also one of the most expensive. For example, I checked a reliable source online and to get a 6 week cycle, taking 50 mg per day, and you would have to pay over $200-300 for such a cycle. This is quite pricey for such a short run, especially considering the fact that you will also need to buy the necessary ancillaries and PCT compounds. Therefore, remember that you must never buy anavar that is sold for a cheap price because you are likely to buy a fake product.

Having little androgenic effects, Anavar is one of the most popular steroids among female athletes. For women, I would recommend running 2.5-7.5 mg per day. Nonetheless, it is crucial to use a solid source, as the anavar can be faked with dianabol instead, which could be disastrous for a woman, who can end up having such virilization issues as enlarged clitoris or increased body hair growth.

Here are some UG labs and mainstream labs pictures of anavar: 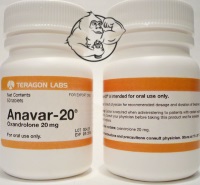 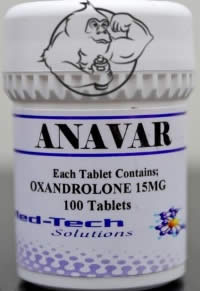 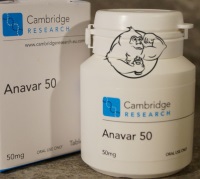 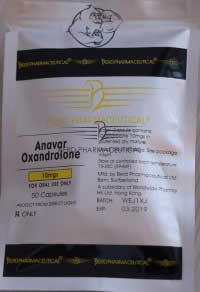 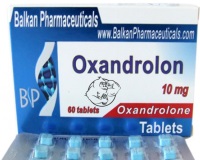 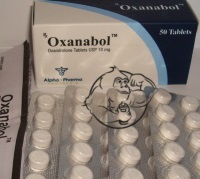