Clenbuterol is a beta2-agonist that displays long lasting stimulant and thermogenic properties. Apart from being used in medicine, it is very popular among those looking for fat loss - bodybuildere, celebrities, or other fitness athletes.

Clenbuterol is approved in some countries to treat breathing disorders like asthma, and it is a widespread therapeutic drug for COPD (chronic obstructive pulmonary disease), which helps with shortness of breath and coughing caused by poor airflow. Men, it was never approved in the United States by the FDA.

Interessant, clenbuterol became popular as a fat loss drug in the modern era of bodybuilding, and some bodybuilders still use it today as an addition to their steroid cycles, or even as a standalone drug.

Som nævnt ovenfor, over the years many celebrities have turned to fat loss drugs like clenbuterol to help them lose weight, Victoria Beckhmam one of the most famous celebrities using this compound. Hvad er mere, younger celebrities like Britney Spears and Lindsay Lohan have admitted that they used it as well.

Den Internationale Olympiske Komité (ICC) includes clenbuterol on its banned list, and several athletes have been caught using it to dope, both in the Olympics, and in professional sports. Faktisk, the most well known cases are those of the swimmer Jessica Hardy, and sprinter Katrin Krabbe, who was not allowed to compete in the 1992 Summer Olympics due to clenbuterol use. Som et resultat, her career was ruined because she was banned for 3 år.

It is forbidden to administer clenbuterol to animals used as food in the United States, but in some countries farmers still use it to keep their animals lean before slaughter. Due to this fact there have been meat, mostly from China and other 3rd world countries, that had clenbuterol residue. Af denne grund, many professional athletes have been warned not to eat certain meat from foreign countries when they travel.

Clenbuterol use in horses

Even though clenbuterol was originally designed for human use, in some countries it is used as a bronchodilator for horses, as it helps them breathe easier, and consequently perform better.

Clenbuterol works in a similar way to epinephrine, and its baby brother albuterol. Det er, clenbuterol will increase aerobic capacity, will raise blood pressure, and will boost oxygen transportation in the process. Desuden, it also stimulates the central nervous system (CNS), which coordinates and influences the activity of all body parts.

Once in the system, it will increase the body's minimal rate of energy expenditure at rest, also known as BMR (basal metabolic rate). This type of response in the body means that when you exercise with clenbuterol in the blood, your body will work harder, leading to more pronounced fat loss.

Since clenbuterol will not render any substantial improvements in terms of athletic performance, it should be used as a fat burner only, which is the prime reason athletes will use it. As it was explained earlier, clenbuterol is a stimulant that will raise metabolism, causing the athlete to work less hard, while sweating more and burning more calories in the process. Faktisk, even when not exercising, and just sitting all day, metabolism will be raised enough to burn fat, which usually does not happen without this compound.

Men, clenbuterol can hurt an athlete's performance if not ran properly, or if ran for the wrong reasons. Derfor, if you are an endurance athlete, this potent drug can hurt your times, especially in the short term.

There is some belief in the bodybuilding community that clenbuterol is anabolic, meaning it can help build muscle. This wrong belief is based on studies done on rats, and there is very slim evidence that a human athlete would get any anabolic benefits from clenbuterol use. Ikke desto mindre, bodybuilding forum guru's have been known to parrot this myth, which makes obvious the fact that they have little experience of actually using the compound. Ellers, they would know that there are no significant anabolic effects with clenbuterol.

The half life of clenbuterol is quite lengthy for such a potent drug - om 30 timer, so caution must be taken because in case the side effects are too harsh, clenbuterol will remain within the body for quite some time.

When to use and dosages

Clenbuterol has a very long half life, so if you dose too high, it will take several days to be totally out of your system. Men should start with 40 micrograms (mcg) pr. dag, then after a few days go to 60mcg, og så videre. På den anden side, women should start off with half that dosage (10-20mcg) and work their way up (by 10mcg). If side effects become too prominent, the dose should be dropped back down immediately.

Typical length of protocol is 2 weeks on, og 2 uger off. This approach is needed to give enough time for the adrenal receptors to get upregulated, and hence recover their sensitivity to the compound.

If you are worried about keeping strength and muscle mass, I do not recommend using clenbuterol during post cycle therapy, or solo. Derfor, if you are a bodybuilder, you should stack it in your cycle, and never use clenbuterol on its own.

This is a sample clen cycle for men 10 uger:

This is a sample clen cycle for females 10 uger:

Side effects with clenbuterol are going to depend on dosages. For eksempel, some users are able to run a heftier dosage without getting any of the common side effects, while others are very sensitive to these types of stimulant drugs, and will consequently suffer a myriad of side effects. Those include a raise in blood pressure and heart rate, halsbrand, hovedpine, jitters, stomach pain, insomnia and nervousness. Another issue is muscle cramps, which is why taurine should be stacked with clenbuterol, and a lot of water should be drank in order to stay extremely hydrated.

Clenbuterol is not expensive, and can be found at many research chemical sites online. Men, in an unregulated industry it is important to use a trusted source, ligesom ag-guys.com. 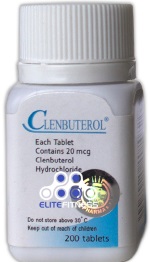