Geralmente, Oxymetholone is marketed as Anapolon, and is mostly known in the fitness community as Anadrol – yet another trademarked name. Portanto, the slang name among bodybuilders is "A-bomb," and as you will see in this profile, there is a good reason why this steroid has been bestowed this name. Anadrol has a reputation for being a very powerful mass and strength building oral anabolic steroid, but it comes with a host of very strong side effects.

Like most anabolic steroids that are now abused by bodybuilders, anadrol was originally used in medicine. de fato, Zoltan Pharmaceuticals developed oxymetholone in 1960 to fight off osteoporosis (bone disease) and anemia (a decreased amount of red blood cells). Curiosamente, other pharmaceutical companies, such as Syntex and Park Davis, also developed oxymetholone under the trade names anadrol50 and androyd.

O que é mais, anapolon also worked well at combating muscle wasting issues in malnourished or underdeveloped people. Contudo, the main issue with anadrol use for these purposes were harsh side effects: too androgenic for females, pronounced liver toxicity, and suppression of male reproductive system (HPTA). Portanto, due to all these problems, anadrol was replaced by safer drugs for these conditions.

Apesar de tudo, today some individuals in the HIV and AIDS communities still rely on anadrol as a cheap alternative to more expensive medical treatments. It is a schedule III compound in the US, making it illegal to possess without a prescription.

Anadrol has an anabolic-androgenic ratio of 320:45. This means on paper that it is 3 times more anabolic than testosterone, and half as androgenic. Apesar de tudo, you must keep in mind that these ratio's can be misleading when translated to real life results. Por exemplo, theoretically anadrol does not aromatize into estrogen, but it does cause estrogenic issues, and it is something that we will dive into later on in this profile. Além disso, anyone who has used anadrol will not agree that it is less androgenic than testosterone and other anabolic steroids.

Anadrol comes exclusively in oral form and each pill was originally dosed at 50 miligramas (mg). Portanto, most underground labs still sell anadrol in 50mg tablets, but I have seen some using 25mg too. Since oxymetholone is an oral, it does not stick around very long in the body, which is not the case with esterfied injectable steroids that last weeks in the system.

In general terms, anadrol works like all anabolic steroids in that it will promote gains in body mass, aumento da força, and improved protein synthesis (which is especially pronounced when the person is taking in enough calories and protein).

Além disso, red blood cell count is important for athletes, and this is why you see endurance athletes who blood dope – take good blood out of their system and then inject it back before their event. Contudo, those who suffer from low red blood cells (RBC) are considered anemic. This is where anadrol proves to be very beneficial, since it boosts red blood cells by stimulating erythropoiesis – the production process of red blood cells.

It may shock many who have used anadrol to know that it is actually a DHT (dihidrotestosterona) derivativo. Apesar de tudo, the shocking part of this is that users report an increase in estrogenic issues such as bloating and gynecomastia (cadela tits). How does this happen? The explanation is simple: in spite of the fact that anadrol is a DHT compound, and consequently it cannot aromatize into estrogen, it can and will in most cases interfere with estrogen metabolism causing estrogen levels to spike.

In total, anadrol should be dosed between 25mg and 50mgs per day, even though some aggressive and experienced users will run anadrol up to 100mgs per day. If possible, the dosages should be split into AM and PM, although dosing once per day is still acceptable with capsuled products that cannot be split. Due to its harsh side effects and liver toxicity, I do not recommend using anadrol for longer than 6 semanas.

Oxymetholone's half life is around 8 horas. Though some users claim it's up to 12.

Of all the major oral anabolic steroids out there, anapolon makes a poor choice for tested athletes because its detection time is a hefty 2 meses. In many situations, athletes even between the 2-3 months range have tested positive.

Anadrol has a structural change at the 17th carbon position, which helps it avoid being destroyed by the liver, so by definition it is a C17-alpha alkylated oral. Infelizmente, this means that this oral steroid is toxic to the liver, and proper liver supporting supplements like N2Guard should be taken together with this steroid.

Como acima mencionado, anadrol is not capable of aromatizing into estrogen, but it will still interfere with estrogen metabolism. This brings a host of estrogenic side effects such as a rise in blood pressure, retenção de água, ginecomastia, and insomnia. Assim, it is best not to stack it with other aromatizing compounds.

Users find that Anadrol gives them very fast strength and size gains, along with side effects too. Por exemplo, it is very possible for someone who struggles to gain weight and size, or is underweight relative to their height, to gain over 10-15 pounds easily after a single 4-6 ciclo de semana. Infelizmente, fast gains are rarely easily kept, and those same users will deflate after stopping anadrol. This is why it is important to build a proper base before using oxymetholone.

Anadrol stacks well as a kickstarter, meaning users will commonly use it the first 4-6 weeks of their 10-12 week injectable cycle. Contudo, keep in mind that if you choose to stack anadrol with other aromatizing compounds, the estrogenic side effects will be harsh, so you must use a quality aromatase inhibitor. A classic anadrol stack for size and mass would be 50mg per day along with 500mg per week of testosterone.

Anadrol is very easy to find on the black market, and it is not expensive to buy for a cycle. Por exemplo, one underground lab I saw had it selling for only $40, which would last for a 6 week cycle at 50mg per day. 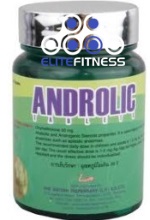 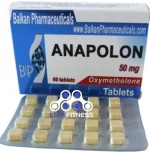 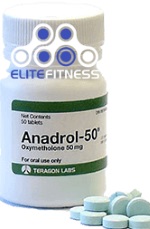 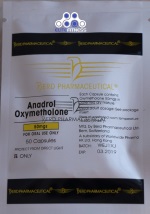